Americano Beans (아메리카노 빈즈), known better as his nickname Amel, is the protagonist of the Korean Manhwa Americano Exodus. He is a part of the prestigious Beans family, which rules the North-Eastern Root District, as well as the leader of seven member team deployed on the earth to capture members of the Twilight Daybreak Group.

He is the only known male character who can use magic in the novel. According to Amel’s mother, Espresso Beans, the society brands anyone outside of the norms a heretic. Because males typically cannot use magic, Beans family fears that they will be persecuted if Amel’s ability is reveals. To avoid the possibility of getting caught, Amel disguises as a female. At the beginning of the novel, his real gender is known only to the Beans family.

His name comes from Caffè Americano, a coffee made by adding water to espresso. His family name, Beans, presumably refers to coffee beans.

He is accompanied by an eagle named aquila.

Undisguised, Amel has an appearance of a 16 year old boy with red hair and purple eyes. Since his mother has  green eyes, it may be assumed that purple eye color comes from his father, who is yet to make an appearance. He also has a mole under his left eye. He usually has a bored expression.

Amel can transform to the appearance set when he was 12 years old. After Transformation, he is dressed like a girl, wearing a feathered headband and his hairs tied in twin tails. He also wears a skirt, a stocking, high socks, high heels, as well as a robe that covers most of his body. He also carries a staff occasionally.

Amel usually appears cold and indifferent. In fact, however, he is rather soft-hearted and has a strong sense of right and wrong.

Amel shows no remorse in taking the lives of members of the Twilight Daybreak Group. However, when his identity is revealed to Chul-Su and Young-Hwi, thereby putting his entire family’s safety in jeopardy, he is reluctant to take innocent lives. Amel ultimately makes up his mind to kill them, but when Chul-Su and Young-Hwi are in danger, Amel saves them, when he could have just let them die. Afterward, he suffers from the guilt that he has let down his family. The Amel’s dilemma between serving his family’s best interest and doing what he believes is morally right is a recurring theme.

Amel is also very careful not to incur any civilian casualties while fighting his enemies.

Amel with a different hairstyle 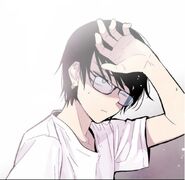 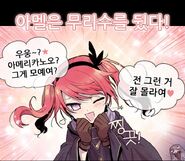 Amel without cloak
Add a photo to this gallery
Retrieved from "https://americano-exodus.fandom.com/wiki/Americano_Beans?oldid=4189"
Community content is available under CC-BY-SA unless otherwise noted.